Anahit (Armenian: Անահիտ) is the Armenian goddess of fertility, wisdom, healing, and water. In earlier times she also represented war, until the domain was taken by the goddess Nane. According to the historian Agathangelos, the king of Armenia extolled her as the "great Lady Anahit, the glory of our nation and vivifier ...; mother of all chastity, and issue of the great and valiant Aramazd." The annual festivity of the month Navasard, held in honor of Anahit on August 11, was the occasion of great gatherings, attended with dance, music, recitals, competitions, etc. The sick went to the temples in pilgrimage, asking for recovery. The symbol of ancient Armenian medicine was the head of the bronze gilded statue of the goddess Anahit.

Anahit first emerged in the 400s BCE as one of Armenia's most popular deities, along with the chief god Aramazd. She formed a triad with Aramazd, her father, and Vahagn, her brother. In Armenia, Anahit worship was established in Erez, Armavir, Artashat and Ashtishat. A mountain in Sophene district was known as Anahit's throne (Athor Anahta). The entire district of Erez, in the province of Akilisene (Ekeghiats), was called Anahtakan Gavar. The historian Berossus identifies Anahit with Aphrodite, while medieval Armenian scribes identify her with Artemis, and she is related to the Zoroastrian goddess Anahita, though she is distinct from her. There are theories that she has a connection with Diana as well because her name backwards, in the Western Armenian dialect, nearly matches (Dihana). The Urartian goddess Arubani may have been an earlier form of her. Anahit was known as Golden Mother (voskemayr), and many of her statues were made of pure gold, or bronze.

Unfortunately, with the Christianization of Armenia in 301 CE, all of her temples were destroyed, as were her statues. One such temple exists beneath Etchmiadzin, the main cathedral of the Armenian Apostolic Church. Despite this Anahit remains to be a popular name with Armenian girls. The head and hand of one statue of Anahit survived, however, and was uncovered by a farmer in the late 1800s in what was at the time the Ottoman Empire and today eastern Turkey, but was once Armenia. The bronze bust eventually found its way to the British Museum of Natural History, where it resides today. Efforts to get the statue repatriated to Armenia have been fruitless because the statue was not found on modern Armenian territory, nor was it technically looted or stolen. A replica is on display at the Armenian History Museum in Yerevan, Armenia.

Her holiday was celebrated on April 6th as Mayreri Or (Mother's Day), or Ode to Anahit.

In modern times she is seen as a national symbol of Armenia, and is still honored by Armenia's small neopagan sect, the hetanos.

The statue of Anahit in the British Museum

A modern statue of Anahit, near an observatory in Yerevan, Armenia

Same statue at a different angle

Anahit in the summer.

A prayer to Anahit in Armenian 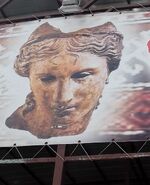 Picture of the bust of Anahit
Community content is available under CC-BY-SA unless otherwise noted.
Advertisement