The Odin Brotherhood is a secret society for warriors and pagans. From the beginning, the movement--in spite of its name--has included women.

The Brotherhood practices the old warrior religion that is today called Odinism or Asatru. Consecrated to the pagan gods and goddesses of the Norse pantheon, these deities are viewed as "older, better, and truer." Members of the Brotherhood use the Eddaic Verses–also called the Poetic Edda–as a kind of scripture.

Members claim their pagan order was established in 1421 to protect the ancient religion during the Burning Times and they insist it has existed in unbroken lineage to the present. If the claim is accurate, the Odin Brotherhood resembles the Tariquat, the secret brotherhoods in Islam that sustain the traditions underground in times of intense persecution.

Who Established the Odin Brotherhood?[]

Like the story of Hiram Abif in Freemasonry, the foundation myth of the Brotherhood involves a crime against innocence.

In the legend of the Brotherhood, the story begins when a young pagan widow was caught honoring the gods and goddesses in a remote grotto. For her action, an angry mob burned her on a pyre composed of green wood.

After the murder, the woman’s three children used an ancient and forbidden rite from paganism (a rite called necromancy) and summoned her from beyond the grave.

Answering the summons, the slain woman instructed her children to save the ancient religion by taking the movement underground. They were instructed to form a secret society–a "conspiracy of equals"--dedicated to the old gods. They pledged to "honor the gods with clandestine rites in deserted places," and they promised to "share their knowledge" with "the few" they trusted before they died.

According to the Odin Brotherhood, all of these events occurred somewhere in Eurasia–somewhere north of the Black Sea--in the fifteenth century of the current era.

They also insist that buried artifacts exist which will some day confirm their tale.

How Does One Join the Odin Brotherhood?[]

Traditionally, the teachings were spread by word of mouth, from person to person.

Secret Societies are still illegal in some countries. As Nick Harding points out in Secret Societies, for example, they are forbidden by the constitution of Poland.

Initiation into the Odin Brotherhood–which only occurs at the solstices–-involves a kind of vision quest cemented by a "ceremony of blood."

In ancient religion, without blood there is no power. That is the reason that animals were cut in half when the biblical Jehovah made his covenant with Abraham. 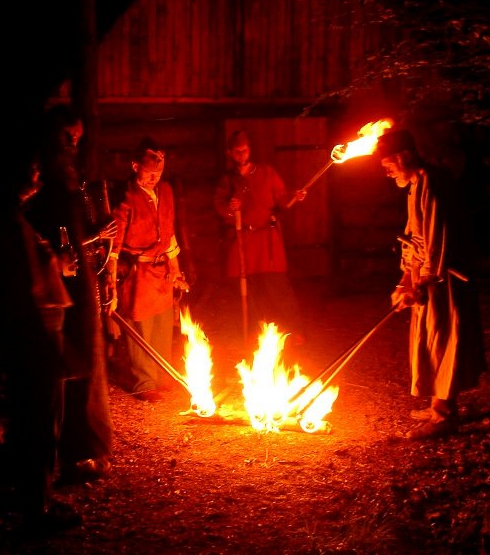 Also, because of the power of blood Jewish boys are circumcised on the eighth day.

The initiation rite of the Odin Brotherhood involves solitude, a diet of bread and ice, a white shroud, a dagger, and a fire.

He then "devotes, hallows, and sanctifies" his soul to the “gods who live” by penetrating a fire three times with a dagger stained with his own blood.

The scars are called "The-Marks-of-Joy." They are based on the "marking with the spear" ceremony described in the Ynglinga Saga by Snorri Sturluson.

The female neophyte, however, makes three small incisions on the tip of her right index finger. The Odin Brotherhood believes the female’s breasts--"the last and most beautiful embellishment she receives in life"--must not be disfigured.

Mircea Eliade, in Shamanism: Archaic Techniques of Ecstasy, notes that secret society initiations resemble shamanic initiations, and include seclusion (symbolizing the "beyond), some sort of prohibition (as in a diet), covering the face and body, usually with something that is white, and a difficult ordeal, which involves the infliction of "cruelties."

Although Odinism never became extinct—hundreds of millions of people have honored the Eddaic pantheon (in its Vedic form) in the Indian subcontinent since Neolithic times--some scholars classify the movement as a neopagan revival.

According to the Odin Brotherhood, "a universe governed by one supreme deity would possess the maddening simplicity that characterizes any dictatorship, but our cosmos clearly shows no evidence of one will at work. Our universe is characterized by diversity and disorder, and that indicates the universe is molded by many wills and innumerable forces."

The gods and goddesses of the Odin Brotherhood, which include Odin, Thor, Frigg, Heimdall, Balder, Bragi, Vidar, Tyr, Freyja, and the other beings in the Norse pantheon, are viewed as powerful entities that are finite in nature. Humanoid in shape--neither omnipotent nor omniscient--the gods are physical beings that inhabit hidden corridors in the universe. Often appearing on earth in disguise, they are known by many names in many languages. Odin, for example, appears also as Hermes and Rudra.

Believing in direct contact with the gods and goddesses, the Odin Brotherhood teaches that the deities typically communicate with humanity through a system of "messengers and spies."

The Odin Brotherhood has three seasonal rites. The rites are conducted without priests, for every member of the Brotherhood considers himself a priest.

The first is called “The-Night-of-Joy.” Held in honor of the goddesses, the “The-Night-of-Joy” is celebrated on the eve of the summer solstice. This festival includes "feasting, jocularity, and frivolity."

The third festival is called “The-Night-of- Generosity.” Conducted on the eve of the Winter Solstice, this festival includes the bestowal of gifts. At this festival "every Odinist gives the world something great and something beautiful."

Ethically, the Odin Brotherhood creates no laws, only virtues. The Odin Brotherhood represents "strength over weakness, pride over humility, and knowledge over faith." Members honor the gods by fostering "thought, courage, honor, light, and beauty."

Viewing themselves as members of a secret or an "invisible army of the gods," members see the movement as a "Creed of Iron."

Members are instructed to be "brave and generous," and "direct, uncomplicated and strong." Members, the Brotherhood believes, must "live well and die bravely."

A tradition for warriors, the Odin Brotherhood teaches that "when the gods made man, they made a weapon."

The Odin Brotherhood teaches that all beings ultimately experience death. In poetic terms, death is personified as beautiful females--called the valkyries--who exist "in an endless variety of exquisite forms."

Since death is not annihilation, the "transfigured life form" will go to one of three Other-Worlds. The most famous of these "Other-Worlds" is Valhalla.

Also called the eternal return or eternal recurrence, the "Law-of-the-Endless-Circle" teaches that existence never ends with destruction. “Nothing dies forever,” and all beings—and all things—will return.

Invention of the Odin Brotherhood[]

Mark made-up a false narrative of how he "discovered" the Odin Brotherhood (which he himself invented). That story goes like this:

Mark Mirabello encountered a silver-haired man in a bookshop in Leith, in the United Kingdom. At the time, Mirabello was conducting historical reseach as a doctoral student in Scotland's University of Glasgow.

The gentleman, who called himself Lodur's Friend (in honor of the mysterious god in the Eddaic Verses), was holding a peculiar cane adorned with the images of the serpent and the ass, the two animals that speak in the bible. Both were examining occult books. The gentleman noticed that Mirabello was studying a book called the The Brotherhood of the Rosy Cross by Arthur Edward Waite. During this encounter the gentleman pointed out that "The rose symbolizes secrecy" while pointing to an engraving in Mirabello's book on the Rosy Cross. The gentleman went on to say that "Since we speak sub rosa or 'under the rose', our discussion must remain forever secret."

The two men became friends, and "Lodur's Friend" introduced Mirabello to a "circle of fascinating individuals." The group met for unusual feasts, normally in Edinburgh or London, always at night, and always during the time of the new moon.

Some years after the publication of Mirabello's book, the anonymous and privately printed Teachings of the Odin Brotherhood began to circulate. Copies of the latter are rare.