A Pagan Pride Parade is street parade organised by pagans as a public declaration of their faith.

The longest running Pagan Pride Parade is held in Holborn London in the last weekend in May. It was first organised in ****.

The parade starts each year in Red Lion Square, Holborn and follows a circular route passing the British Museum.

The London Pagan Pride Parade is always led by the event organiser Jeanette Ellis with her antler tipped ceremonial stang and the Jack in the Green, a large cage covered in dense foliage and crowned with antlers which resembles a walking bush. Behind them comes the eight foot parade banner (pictured at right) which depicts the Green Man carried by six bearers. 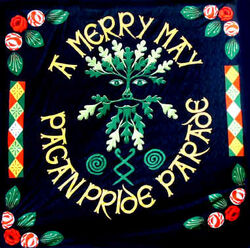 Following close behind is the organisers parade giant the Morrighan with her two accompanying Ravens and drummers.

Strung out in procession behind them are parade giants provided by other groups, group banners and a sea of jubiliant pagans wearing their best Beltane finery.

Giants were once a common sight in British street parades. They are typically a framework at least 12 feet high and decorated to resemble a humanoid figure. One person stands inside the frame to carry it along.

The organiser's website for the London Pagan Pride Parade.